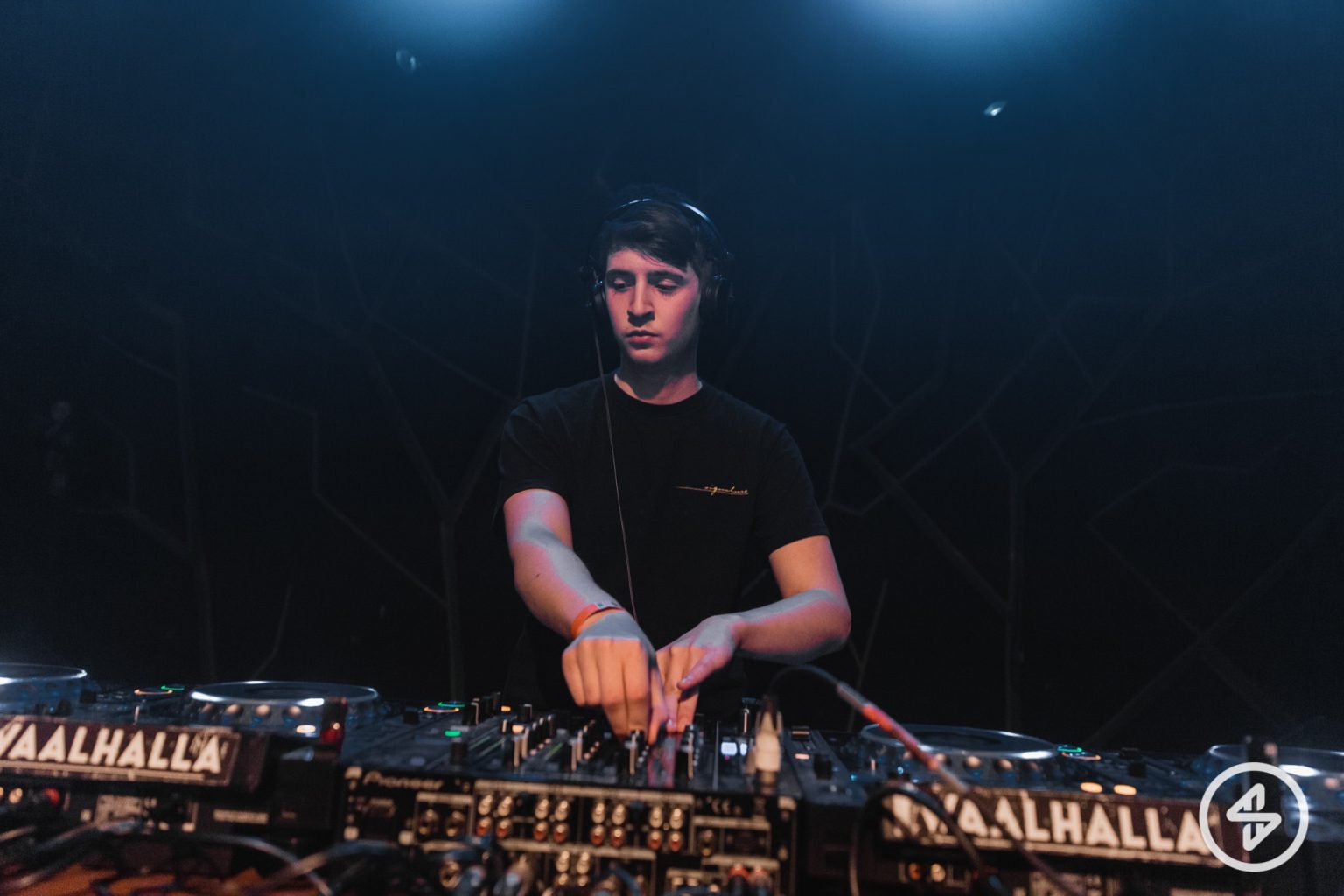 Could you tell us a little bit about yourself?

My name is Querijn van Bijsterveld (Leniz), I’m currently 17 years old and I’m studying human resource management at the HAN in Nijmegen. Music is a really big part of my life, outside of music and sports (I do the occasional home-workout, run and bike ride) I do not have a lot of different hobbies.

How did you get into music?

I started getting into music in the last year of elementary school. Me and a few friends that were really into hardstyle thought it would be really cool to perform at big stages. We realised that, to be able to do this, you needed to produce your own music, so this is where it all started.

Eventually I’m the only one that stuck with it and kept doing it. And nowadays I’m done with the hardstyle and I’m into Drum and Bass. Eventually I lost contact with these friends, everybody went their own way, but I made new friends in de Drum and Bass scene along the way and I have a really close group now. I never really played an instrument, not even flute, which is quite a pity because it’s a lot harder to compose a complex melody, which I would really like to do.

What role does music play in your life?

I spend a lot of time making and mixing music because I like it so much, this often influences my school-career in a bad way [laughs] but I try to balance it a bit, which can be quite hard. I am well on my way with my music career, this year I would be playing on 3 festivals, but unfortunately they will got cancelled because of corona. I released some music on some medium-known labels in the D&B scene and I have some things that are still being released this or next year. I can’t tell you on which label yet because it’s still not officially allowed to tell something about them…

If music had never been invented, would you have blamed your parents for creating you?

Well, I don’t know, it’s hard to think about because I have no clue what I would be doing if I wasn’t occupied with music! Maybe I would have done something with photography if music never would have been invented, which I like to do from time to time. I think the world would be a lot more boring if music would not have existed. I get that it’s a funny question, but if you really think about it you would just be used to music not existing and life would be completely different.

What music do you listen to in day-to-day life?

I listen to a lot of different kinds of music, but I stay mainly within the electronic spectrum. A lot of chill-like things as future garage or normal UK garage. Of course I listen to Drum and Bass, but also house, some techno, ambience, just name it! If it’s chill, I listen to it.

Are you a DJ, a producer or both?

Both, I’d say 50/50 DJ/-producer. I like them equally, I don’t really have a favourite. I really like standing in front of a crowd and playing tunes, among which of course my own tunes. But I also like seeing the response online when I released a new tune or ep. It both really motivates me to keep going, it’s not like I put an accent of one of them.

I started doing both at around the same time. At first I cracked FL-studio and started playing around with it. I put all kinds of samples after each other and called it a track, even though it didn’t have any build-up and it were only random sounds put after each other. Slowly it started to get more serious, and after I saved up I bought my first small Hercules controller.

How would you define your style?

As a DJ I’m more focussed on atmosphere. When I make transitions I like to do longer blends, with songs which work good together in a melodic way. These are often things I need to practice at home to find out if a transition works or not. Because if I want to do a blend I would like it to be perfect.

What was the coolest gig you have ever performed at and why?

Well, that’s a hard one… I played on Liquicity events multiple times, twice in Antwerp and one time in Heidelberg. I think that Liquicity events were generally the best nights, because I got to meet some bigger artist and the nights on itself were just awesome. On these events there is this special ambiance. Most of the times you have two stages, one more mainstream one, and a second stage with more underground sounds where people like me perform. And at these stages you only find people who are really there for the music, which you can feel in the vibe which is amazing at these stages. I also got to play at Liquicity festival, but I got to play at Saturday morning when it was raining really hard, so there was almost nobody. But the whole festival was dope and it was still really cool to be there as an artist.

If you had to describe your dream gig, what would it look like?

I think it would be the first or the second gig, because then I can party myself afterwards. You can play less hard of course, but it depends on the line-up if that’s relaxed or not. Most times it also depends on the people being there, depending on if I know a lot of people or not. If there are a lot of artist in the line-up I speak to more often its immediately a lot nicer. I think I would like a gig a bit more underground, a warehouse scene would be really cool!

What are your ambitions as a DJ?

I want to continue to grow! I have one main goal, and that is that I would like to perform at ‘Sun and Bass’ in Italy. It would be an honour to DJ there. I think I can reach this goals when I just keep working on my music and keep doing my thing!

Do you have any tips for people that want to start DJing?

Often you start with a controller. I started with watching the waveforms and trying to beatmatch. Don’t be afraid to do this by looking, but realise that you need to learn beatmatching on hearing. This you can train in combination with looking. I still sometimes look, but I can also do it by ear (but looking is easier).

What is your favourite track you produced yourself?

Where do you get inspirations for your tracks?

How does the production of a track usually go for you? Take us through the process!

I usually start by looking through my library of melodic samples, or I sampled a melody from a piano, but I start with a melody. With this melody I set a vibe from where I decide if this is more a jungle track or more a different kind of track. From this point I start to work out the track more. The most important thing for me is the vibe, it has to be there, if I don’t feel the vibe I don’t continue producing with that sketch.

Do you ever create music with others?

Yes, a lot. I worked together with a guy from Mexico, somebody from Estonia and a lot of different people from the Netherlands. There are a lot of collapse projects I still have to finish.

I meet the people I work with mostly through internet, some of whom I know really well by now. I also met people through my participation in the A&R of the label ‘Differential’, we release a lot of music together so I know some of them really well.

What are your goals with regards to producing?

That’s a hard one, because I have reached the goals I had for now. Previously my goal was to sign with the label ‘Hospital Records’, but the problem is that they only offer you a permanent contract, which I feel would not be beneficial for my musical creativity. I think it would be cool to release an EP for ‘Metalheadz’ or ‘Integral Records’ in the future though.

Do you have any tips for people who want to start producing and have no experience yet?

If you produce music because you really like to do it, you should do what you want and don’t give a fuck about the rules of ‘what music is sellable’. Maybe you will make a whole different sound which will become a thing, who knows!

What motivated you to join SoundLab Nijmegen?

It thought it would be really cool to meet musicians from the neighbourhood. Its always a good thing to have connections outside of your own genre, because it could help you get really interesting collabs or conversations.

What is at the moment your favourite artist and why?

It was really hard to choose, so I made a list: Vacant, Sorrow, Burial, Seba, Paradox & Alaska, Synkro & Leon Vynehall. I made a list because I can connect more easy with soundscapes and atmospheres then with lyrics. I don’t know why, but that’s just the way it works for me. And these guy really do it well, they have a certain vibe in their tracks that I just really dig. These artists all work in a different genre, that’s why it was so hard for me to choose, they have all such cool music!

If you had to give one must-listen to song to the readers, what song would it be?

This one was really hard for me, I doubted a lot, but I chose: ‘Om Unit & Synkro – Reflections’. I chose this one because the same reason as why I chose my favourite artists. The atmosphere in this one is just insane. And if you really want to appreciate this track you should do it in the right setting: during a walk late at night when there are no people on the streets!